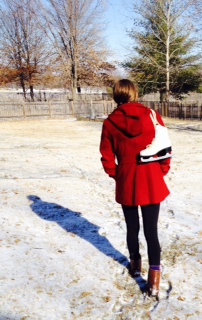 I love the Kansas suburbs. I do. But once in a while I yearn for someplace far to the north.

A few weeks ago, my sixteen-year-old wanted to go ice skating with friends. They planned to meet at a popular shopping center with an outdoor rink.

She rolled her eyes. “Everyone’s meeting there.”

“Do you have money for admission?”

“What about the weather?” It was eighteen degrees and windy.

She pulled up her pant leg and pointed to her new wool socks. “Really, Mom. I’ll be fine.”

Half an hour later, I asked, “When are you leaving, honey?”

She shrugged. “We aren’t going. It’s too cold.”

Relief flooded my heart, but it was tinged with sadness.

When I was five, my dad laced up my double-runner skates and led me onto the ice at Fireman’s Park. He took turns with my sisters, pulling me around the rink until I could balance on my own. The next year I wore a hand-me-down pair with single runners, and my choppy steps evolved into a one-two-three-glide technique.

In middle school we lived near Tiedeman’s Pond, which froze solid every December. I walked there, my skates tied together and slung over my shoulder, and skated with my friends until my toes were numb.

Winter was for skating. I wasn’t a graceful girl, but when I glided across the ice on one runner, my other skate stuck out behind, I was Dorothy Hamill. When I skated backward, I was Sonja Heine, making figure eights. When I sped around the empty pond, I was Eric Hayden, winning Olympic gold.

My children associate skating with oval patches of bumpy ice crowded with wobbly school children. They cling to one another for support and slam into walls to stop. Skating is a once-yearly novelty inflicted on them by their mother.

For them, freedom is a swimming pool.