After a blog-free holiday season, I have big plans for January.  In the coming weeks, I’ll feature reading, skating and free-trade coffee, but I’ve set apart today for a different kind of treat.

In spite of my chirpy essays, I know to my bones that we live in dark times. 2013 was a difficult year, and 2014 will bring trouble of its own. How, then, do we face a New Year? How do we go forward into uncertainty?

In hope, dear readers. In hope.

I asked my friend Kathy Nickerson to illustrate. Kathy is a talented writer who has lived out hope in her own dark times. Her engaging novel, “Thirty Days to Glory”, takes hope as its theme.  I think you’ll be encouraged by the story she shared.

We See Eagles
by Kathy Nickerson

I love Christmas in the Midwest! Snowy hills and country roads. Roots and traditions that stretch back for generations on both sides of our families.  January in the Midwest, though? Not so much.

The calendar claims January only has 31 days, but sometimes it seems longer. After the initial ringing in of the New Year, January can trudge along like a farmer across a winter field. Not the snowy field of Currier and Ives, either. January’s field is full of stubble.

My husband and I live in an intentional Christian community that is dedicated to helping people get a fresh start in life. January is a hard time for many of these folks. Their holidays have never looked like a Hallmark card, and the promise of a Happy New Year often feels impossible. A few always give up during this season and turn back to their old lives of alcohol, drugs, and various forms of abuse.

I was thinking about those things one day while driving through the stubbly cornfields toward town. I thought about a family who had just left and about a young man who was struggling. My mind was focused on the harshness of winter on the earth and in the soul.

Then, I came around the corner and saw a huge, majestic bald eagle standing in the field. I immediately slowed the car and veered toward the shoulder. The eagle turned his head toward me. The wind ruffled his feathers and made him appear even bigger than he already seemed. What a glorious, unexpected sight. 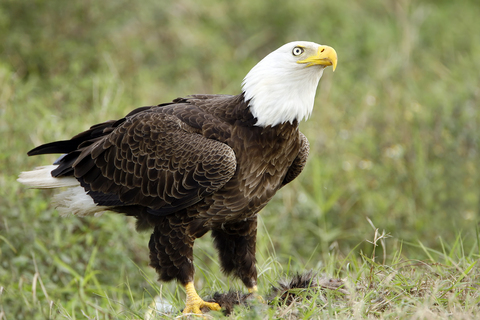 We sat for a while, the eagle and I, contemplating one another. Then, he flew away, and my thoughts lifted with him. Suddenly, I remembered the new baby who had just been born to a reconciled family. The former prison inmate who was now one of our church ushers. The long list of men and women who had bowed their knees and their hearts at an altar. The people who had grasped hold of our motto that “Jesus is the Answer.”

Yes, winter can be hard in the Midwest. Days can stretch long and barren. We may spend weeks fighting ice, wind, trouble, and despair. But, even on the hardest days…

Kathy Nickerson writes from her home in rural Missouri, where she lives with her husband of nearly forty years. They are the parents of four children who grew up to become their best friends and who have given them a dozen grandchildren, so far. You can find more of Kathy’s stories at www.kathynick.com.