My friend April and I spent a June weekend exploring central and western Kansas. This post is a story from our trip. 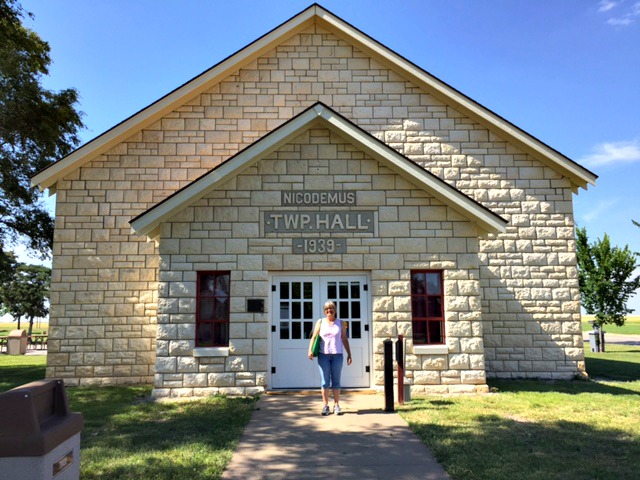 When April and I sat down to plan our three-day trek through western Kansas, the town of Nicodemus was my only non-negotiable stop. Small as it is, the National Park System recognizes its importance, and keeps the museum open year-round.

The story of Nicodemus echoes a common theme among western pioneers, that of escape from oppression in the home country. For the ex-slaves who settled there, Kentucky was the home country, and post-Reconstruction racism was the oppression.

Coming from the green Kentucky mountains, the land seemed forbidding to the newcomers, but those who persevered managed to scratch out a living. Friendly neighbors helped the newcomers survive their first few winters, and a viable community soon took shape. By the early 1880s, Nicodemus had “general stores, a bank, a millinery shop, newspapers, a blacksmith, law and land offices, and many social and fraternal organizations.” (National Park Service brochure)

The little town suffered a common death blow. When the railroad went through in 1888, it bypassed Nicodemus. That spelled the beginning of the end. Along with hundreds of other small communities forgotten by railroad (or the interstate, later on), the town dwindled away. Today a small collection of stone and wood frame buildings stands as testament to the hope and perseverance of its original citizens. A good museum housed in the Township Hall tells the story.

Ten descendants of the original founders still live in Nicodemus, and four still farm in the surrounding county. To me, the town is heartening. Kansas is known for the Brown v. Board of Education of Topeka case, which desegregated schools in 1954. But long before that, on the western plains, a group of African Americans carved an equal place for themselves among their white neighbors, a place that continues today.

Score one for the pioneer spirit.