Picking Apples in the Suburbs

Apple season is one of my favorite times of year, so when I walked into HyVee’s produce section a few weeks ago and found ten different varieties, I couldn’t wait to try them all. That day I brought home a bag of Rome Beauties, a deep burgundy fruit with crisp white flesh. Today I went back for more. I stacked my grocery basket with exotic names like Honeycrisp, Zestar, SweeTango, Cripps Pink, and Jazz. When I got home, I set up a tasting station in my kitchen, and talked my kids into helping me as they walked in the door from school. Here’s what we learned.

Preliminary research: According to the web site Orangepippin.com, all the varieties we tried were developed in the last thirty years. All are recommended for eating, but not for cooking or baking.
Texture: All five apples had the same amount of crunch, and all were relatively juicy. Not surprising, since they were developed to be sold as eating apples.

Taste: Here’s where the apples differed. The Jazz apples offered overtones of pear, while the Zestar tasted like cider. Cripps Pink, also known as Pink Lady apples, had the same tartness as a Granny Smith, while the Honeycrisp and SweeTango had very little flavor.

Oxidation: Zestar and Jazz turned brown the fastest. SweeTango did not oxidize, a trait I like.
Apple preference is an individual choice. We all disagreed about which apple was the tastiest. I fell in love with the cider-y Zestar. Matt liked the relatively bland Honeycrisp, while Emily said the Cripps Pink tasted “like an apple should.” (Matt also protested that the experiment was “all sort of apples to apples, if you know what I mean,” but I didn’t take him seriously.)
While at Hy Vee, I also bought a half-dozen each of Macintosh and Cortland apples so I could make applesauce. I love Cortlands because they’re good both for cooking and eating, and they do not oxidize.

While the taste tests were going on, I cooked down the Cortlands and Macintoshes.

Then I used my food mill to separate the peel from the flesh of the apple. 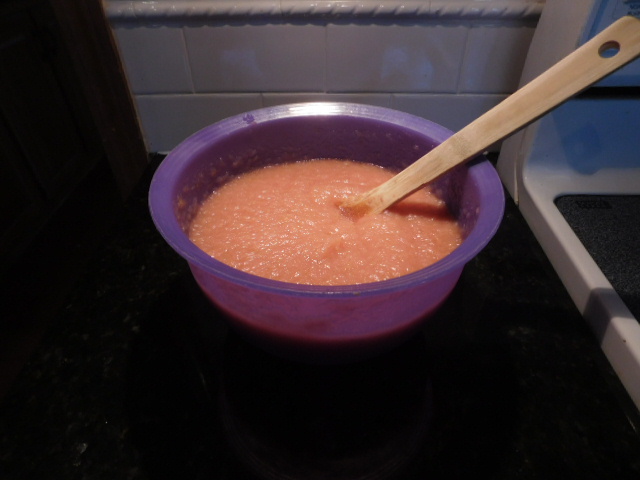