Tell Me a Story of Family Today I offer you proof that the Midwest is one big small town. My parents and grandparents were all born in Indiana, but scattered later in life for jobs, careers or retirement. Since they all lived somewhere else by the time I came along, I’ve had very little to do with the place. I can name the towns where each of them was born. For example, my dad’s mother grew up in the small town of Danville, west of Indianapolis, and her family was prominent in Danville’s history. 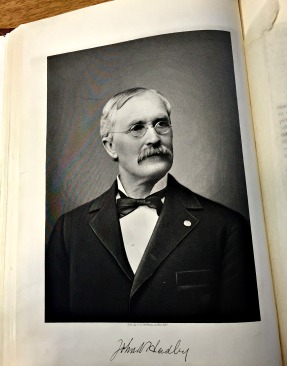 My grandmother’s grandfather, a lifelong citizen of Danville, is a storied character in our family history. John V. Hadley is remembered, not so much for becoming a prisoner of the Confederates during the Civil War, but for writing his memoirs about that event. He also served ten years on the Indiana Supreme Court. See what I mean? Prominent.

This summer my nephew, a Colorado boy, is getting married. The wedding will take place in his bride’s hometown: Danville, Indiana.

I told you. It’s all one big small town.

When my daughter Emily was a fourth-grader, she wrote a book about John V. Hadley for a school project. Her research method was to read bits and pieces of Seven Months a Prisoner, and ask her granddaddy lots of questions. When she added her voice to the telling of the tale, she brought it into the twenty-first century. To wit:

Last weekend I met my sister-in-law, the mother of the groom, in Indianapolis for a bridal shower. We split our free time between wedding planning (for her), and the pursuit of family history (for me). John V. Hadley was not really my objective, but I loved and admired his granddaughter (my grandmother, for those of you keeping score at home). I wanted to see the place where she grew up. It took some digging, and a little imagination to peel back the years and find the Danville she would recognize. We started our search at the Danville Public library, a beautiful structure built in 1903 with a Carnegie library grant. (One of these days I’m going to start a collection of original Carnegie library buildings.)
The Danville library has a room devoted to Indiana history, and there we found a lady who knew an alarming amount about John V. Hadley. She let me handle an original copy of Seven Months a Prisoner, and gave detailed directions to his former home.
She knew much less about his granddaughter, but dropped this intriguing tidbit: My grandmother’s parents grew up across the street from one another, in these two houses:

Not far away we found the lot where Grandmother’s birthplace stood. It burned in the 1920’s, and a brick one-story now stands in its place, so I did not take a photo. But I appreciated the physical perspective it gave me. Grandmother lived down the street from her grandparents, and within easy walking distance to the library. On the other hand, she lived at the edge of town, where undeveloped land stretched out to the east. From these roots it was easy to see how she became the bright, educated outdoorswoman I knew and loved.

One last word about old John V. He secured his place in history by writing a book, but it was an honest history of his own experiences. I wonder what he would think of his novel-writing great-great-granddaughter?

As I walked the streets of Danville, I could not help imagining my ancestors’ lives in novel form. (Don’t worry, Dad. I won’t be writing it.) But the Hadleys are not special in that way. Every family history contains a few great stories. So now, dear readers, it’s your turn.

Tell me a story about your family.