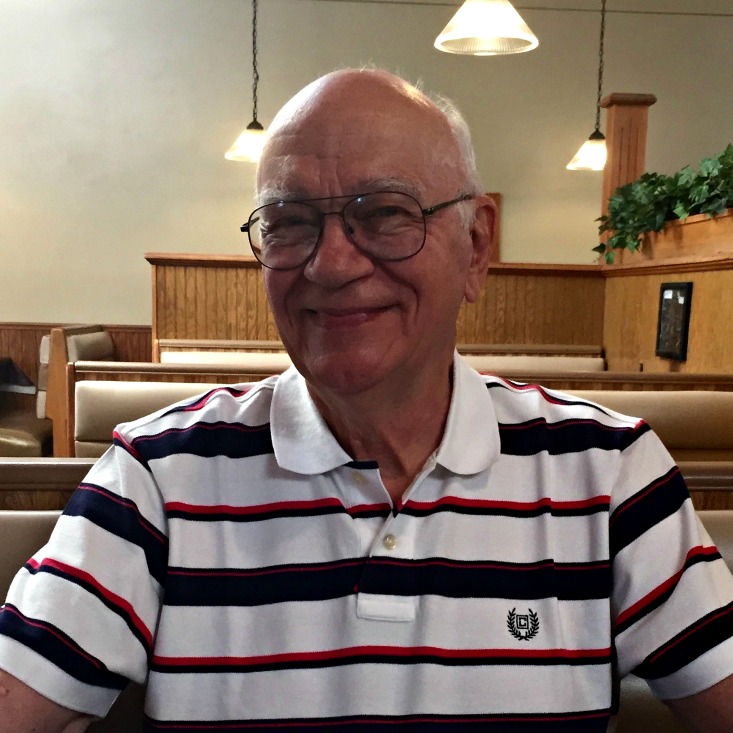 In July, my dad Sam took my daughter Emily to a rodeo, a memory-making trip they’ll treasure for years to come. When they returned, Dad shared this story with me.

The Rodeo
by Sam Malsbary

Well, this started out to be a story about a trip to a rodeo, but that’s not where it ended up.

My granddaughter Em is game for most anything and she had never seen a rodeo, so she agreed to go with me to Pretty Prairie, Kansas one beautiful, hot July day. The town brag is that their rodeo is the oldest night rodeo in the state. A small town of about 650 people, the citizens of Pretty Prairie have been rodeoing under the lights for 80 years.

I had received a gracious invitation to dinner before the rodeo, which sounded like a good deal. Pretty Prairie has a shortage of restaurants and I knew we’d be hungry. Following directions from our host we turned south from Hutchison. We passed the appliance store in the middle of its grass-grown parking lot, figured out the highway number did not agree with the map I was holding (is this part of Gov. Sam’s cost saving plan?), and finally reached the sleepy town where we were admonished to watch out for the chickens in the road. The chickens, having unionized, were on break, but they left some armadillos to carry on in their place. Just past the abandoned church we turned west, looking for a river.

Rivers come in all sizes, and we finally spied the one in question, a modest stream of water running under a bridge. Turning at the next pasture, we crept for half a mile to keep the dust down and found a campsite packed with tents of all sizes, two mobile homes and six or eight hammocks strung in the trees. People of all ages milled around, having fun on the bank of the small river.

A fire pit glowed under the shady trees on the riverbank, and a bunch of people gathered close. Now, the temperature was in the high 90s, so why were these people standing around a fire? Em and I grabbed folding chairs and headed off to find out. When we spotted the professional sized grill, we knew this would be the scene of some action.

A nice bed of hot wood ashes glowed under the grill, and I was relieved they weren’t using prairie coal. The cooking surface was about 15 inches high so there was plenty of room for a good fire. After a while three big 16 inch skillets were placed on the grill to start to heat.

When the skillets were hot, my host poured on some oil and filled them with taters, sweet corn, sausage, and salt and pepper. Eight cans of chilies, opened without the use of an electric can opener, went into the skillets and heavy cast iron lids set on top.

The Bronc rider, the Marine, and my host brought out their chef tools. The shortest one was at least five feet in length, and the longest reached out to over six feet. One was a spatula with a steel pipe for a handle, another was welded to a scraper. The third looked like a cut down Number 10 grain shovel. These custom-made tools had no Teflon. Of course there was no Teflon on the skillet either.

Like all professional athletes, the chefs warmed up before the contest. They stretched at the hitch rack like it was a ballet barre, looked over their special tools, rotated wrists and shrugged shoulders, and stepped up to the task.

Finally the match began. Reaching over the skillets with a pot hook, the chefs removed the lids and began to stir. They raked. They swiveled. They rotated and lifted, chopped and counter-rotated, all the time keeping an eye on the competition. They salted and peppered, threw in onions and mushrooms, replaced lids, lifted lids, and started all over again.

Watching all this activity generated my appetite, and I’m sure it was so for the rest of the crowd, which by this time had grown to over 80 in number. Just when I thought they were going to riot, one chef declared a skillet to be properly stirred, and lifted it to the serving table. The others followed suit in short order. In no time, all that hard work and artistry was gone. Only a few foil packets remained, made up for the hungry ones after the rodeo.

Well I never did hear who won that stirring contest, but it was surely a sight to see. It was not an 8-second contest like the rodeo. Now I’m not running down the rodeo because it was a top notch, professional event. I’m just saying those boys entered in the stirring event were in a class of their own. I’m sure they had professional trainers in their party who did not receive the proper recognition for their contribution to the contest.

You may be as curious as I was about the tools in use. I asked about the long handles, assuming that this avoided having to lean over the skillet.  My host explained that the reason for the custom tools was to keep shins from getting singed by the fire!